The Oracle Database application suite is still one of the most widely deployed commercial database apps today. It is used to support a very wide variety of usecases such as ERP systems, CRM systems, E-Commerce solutions etc.. Given the nature of the commercial licensing, performance and tuning are critical to ensure that a consumer gets the optimal performance per $ out of their investment.

On this page we provide the methodologies and tools used by us to setup and evaluate the performance of Oracle database running on different platforms and configurations. The more details are provided in the following sections.

When the Oracle database is the choice for your application, it is needed to assess Oracle random physical I/O capability on a given environment/platform in preparation for OLTP/ERP style workloads. There is no shortage of transactional benchmarks such as Dominic Giles’ Swingbench and cost-options such as Benchmark Factory. However, the problem with these kits is these kits are transactional so they are more suitable to prove Oracle scales those applications, rather than test database I/O characteristics. These transactional test kits involve physical I/O but the ratio of CPU utilisation to handle physical I/O is generally low and most CPU resources are being used to execute Oracle intrinsic transaction code paths.

Oracle SLOB – the Silly Little Oracle Benchmark is a complete toolkit for generating I/O through an Oracle database. SLOB is the tool to analyse the I/O capabilities of your Oracle database. SLOB testing has been used by many industrial vendors to show the SLOB results in their use cases, which are available here as a collection of articles.

The focus of the tests covered in this page is the database I/O characteristics, so SLOB is utilised to analyse the performance of database I/O. Considering SLOB is just an Oracle I/O workload generation tool, rather than a database benchmark tool, there isn't a direct performance indicator provided by SLOB. The actual I/O performance will be assessed by the standardised set of performance metrics and resource metrics collected by Oracle database. The metrics and their indications will be introduced more in details when they are used for evaluating the performance in the sections below.

The SLOB kit is available to be downloaded here at SLOB repository. A full documentation for usage of SLOB is available at this PDF file.

The SLOB's configurations involved in the performance tests are follows. For more guidance about the tunable parameters of SLOB please find them in the SLOB documents.

The platforms and VM instances hosting the Oracle database to be tested are configured as shown in the following table.

The instance hosting the Oracle database is configured as the steps listed below.

Replace the kernel as stock kernel does not have multiqueue blkfront.

The host operating system has been configured in the /etc/sysctl.conf file as the following setups.

Download the Oracle database package and install it using the installer wizard. More information about Oracle Database installation is available at Installation Guide provided by Oracle.

There are a set of variables involved in the tests to be adjusted for illustrating the performance metrics we are interested in. These variables are oriented from the resources required by the Oracle database and they are independent to any platform or hardware.

There are also a set of metrics which are indicators of the performance or resource on certain aspects in Oracle database. The value of these metrics are available in the awr report when the SLOB workload is completed. These metrics are analysed coherently to understand the specific performance metric when the resource metric(s) is within certain range.

Performance with increased number of cores

In order to test the performance of Oracle database when different number of cores are used by the instance, the other variables are selected accordingly to reflect the real-world setup as much as possible. With the increased number of cores, the number of schemas in the Oracle database are also increased to increase the load proportionally. The memory allocated to the instance and the buffer cache size of Oracle database are also increased. However, since the focus of this test is physical I/O performance, the instance memory and in particular the buffer cache size are configured in relatively small values. These variables are summarised in the table below.

The AWS R5 instance type has fixed configuration on number of cores and memory size, so the memory size on the AWS R5 instance is larger than other platforms, which however shouldn't cause difference as the memory usage by Oracel has been limited by the sga_target parameter. For the provisioned IOPS SSD attached to the AWS R5 instance, it is designed to deliver a consistent baseline performance of up to 50 IOPS/GB to a maximum of 64,000 IOPS. Thus, the disk size for the instance on AWS R5 configured to be large enough to achieve the maximum IOPS of each instance type.

The following results are the average performance and resource metrics captured during the SLOB generates workloads for 5 minutes. 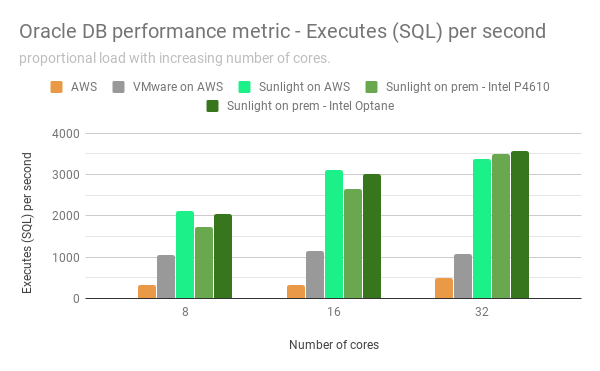 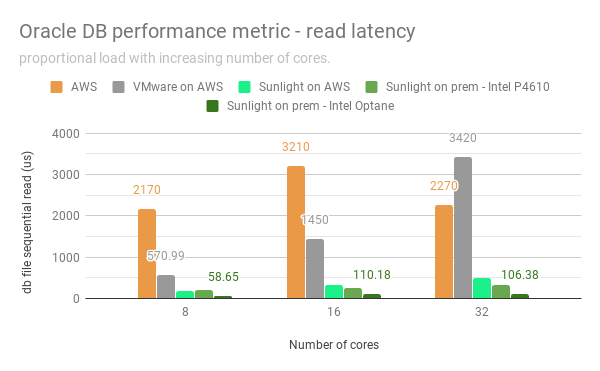 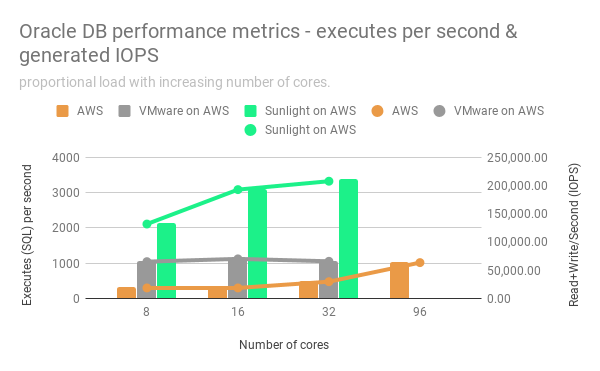 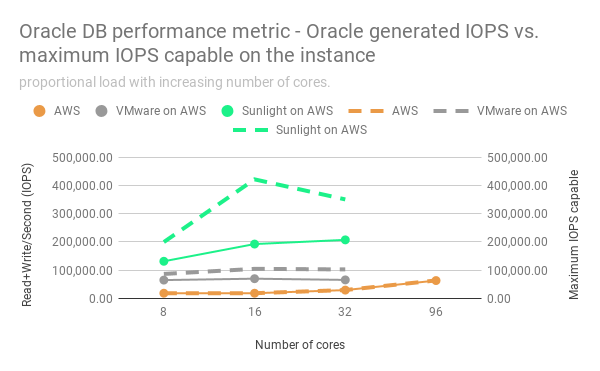 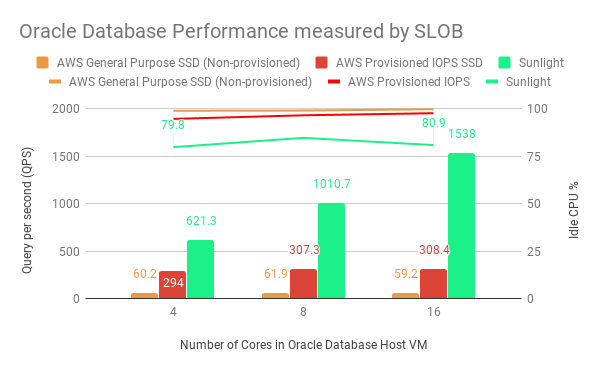 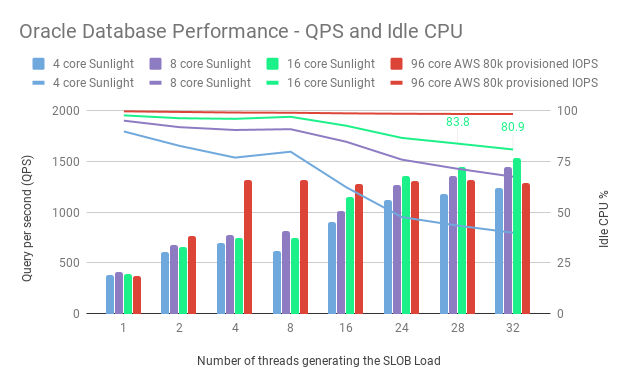 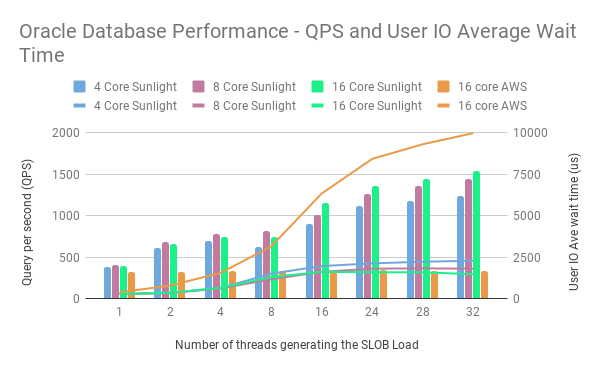 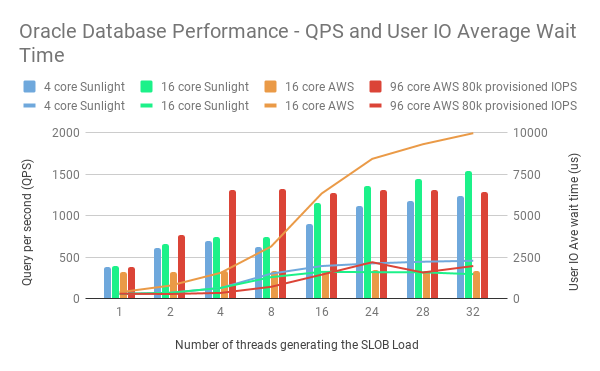